In the last years of Ottoman Empire, with the development of trade, the seas of Lesbos were full of life and movement.
There was a continuous flow of movement between LESVOS and the opposite coasts not only from Ship owners, Greeks and Turks sailors, Merchants, but also craftsmen from Aivali, Bourgeois and industrialists from Izmir and workers as well.
PLOMARI, is built in a secluded area of LESVOS island, with steep mountains, deep seas, rocky shores and cliffs. At that time this small village was emerged slowly from its isolation and became a major industrial town and a busy commercial port.
Mills, soap factories, metal and shipyard industries were under constant production.
The industry brought trade, the trade brought wealth, the wealth brought the land and labour exploitation, which finally brought trade unionism in the area.
Workers used to work 12 to 15 hours, from night to night, either in the fields or the factories but also, at the shipyards as well.
This is the time when the first "Rakitzides" arrived in Plomari.

One of them was Demetrius Giannatsis.
With the recipes of the Orient in his luggage, he found here the best materials to create his distillates.
He took the best ingredients like Grapes of exceptional quality, which then cultivated in Lesvos, Anise by Lisvori, Fennel and Herbs from the surrounding mountains, and finally gentle, and soft water of the Sedoynta River which rips up the PLOMARI village in two parts.
Apart from all these materials he found the appropriate people who worked really hard.
"Ouzo of Rakitzides" was the only consolation and the balsam of labour workers who worked till the sunset and meet afterwards at the coffee shops.
They drank their "25raki" quietly and they went straight ahead at their homes.
There was not "Ouzo" at home" said the old people.
They would only drink it at the cafes, with good company, and it was served with appetizers.
At that time PLOMARI i was full of distilleries. Today only four left. One of them is the distillery of DIMITRIOS GIANNATSIS, formally founded in 1932
GIANNATSIS, made his long journey through time, with love for the scent of ouzo, having passion for the art of distillation and respect forthe past.

Light and pleasant in taste with distinctive aromas of anise and some, touches of mastic and flower notes it is used as an Appetizer, ouzo is drunk with the addition of water or ice at one's will, which adds to its rich emulsion. A perfect accompaniment to appetizers, such as olives, sardines, fried cheese, grilled Octopus and local seafood such as scallops and clams.

Smooth and lightweight, it combines the measured anise from Lesvos with a rich palette of earthy aromas and starch.
It is a Desktop ouzo with a 100%, distillation. Moreover it has a last long after taste and it is preferably drunk with the addition of frozen water or not.
It accompanies grilled fresh fish, squid, shrimp or mussels and salads from fresh local vegetables with Sun-dried Octopus or kolios fish.

This distinctive flavor and aroma brings back summertime memories.
Provided with an extremely unique culinary romp.

The traditional recipe of Dimitris Giannatsis, withstood the ravages of time and following a route of almost a century is even more updated in our days.
It is an Excellent quality product, for the following reasons:
perfectly balanced when tasting
sweet without sugar or other sweeteners
naturally flavored with aromatic herbs from the land ofLESVOS
diluted only with the unique water from the fountains of Plomari
this excellent product with all the above characteristics comes straight from the stills in your glass.
"that's the taste of ouzo...» commented an elderly man at a Cafe in Polichnitos of Lesvos, savoring another gulp from his glass.

The New handmade Retro packaging wanted to differentiate significantly from other packages on the shelf or the shop window with a hint of originality and elegance.
The original idea was born from the memories of immigration after the first world war and the civil war, that means sixty years ago- in the, early 1950s. Then the economic situation of Greece was awful. Poverty ruled the cities and the countryside.
The Greeks-being cut off-struggled desperately to bear the economic burden but in vain. Quickly Greek people saw that there was no other solution but to immigrate again. A lot of Greek people immigrated to nearby European Countries which had development like Australia, South Africa and USA The Greek people made a great fortune.

A TRILOGY OF OUZO

Today that many try to convince us to buy in bulk amounts Tsipouro, Tsikoudia or other alchochol drinks , putting at risk our health and usually surpassing taxes, we insist with great responsibility to put our signature on Greek ouzo and diligently seek the best quality and most stylish packaging that OUZO deserves ...
Available at: 200ml | 40% vol - 42% vol - 45% vol 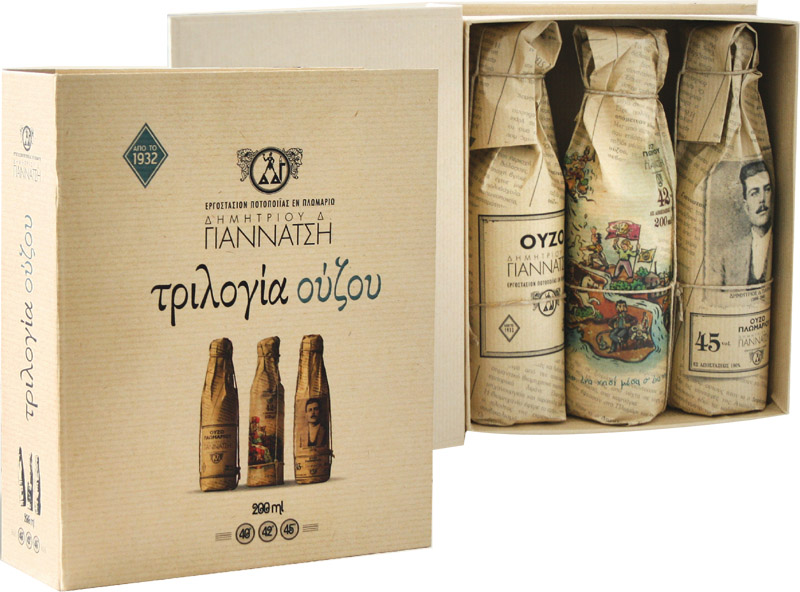 In the shadow of the rocks of Mount Olympus, at 700 metres altitude, the Romans 2,000 years ago planted the firs t"KASTANIONA"
Gradually it covered the whole area till Megalochori.
In spring time when the chestnut bloom then the beekeepers carry their hives to this place .
When the chestnut vendor, the beekeeper, the wood carver and the distillator collaborated then they were able to synthesize this wonderful handmade drink(liquer) from LESVOS that made us all proud.
Here we should note that the stopper cap is made from the blessed olive wood and is handmade by local wood carver in order to seal the premium of quality. 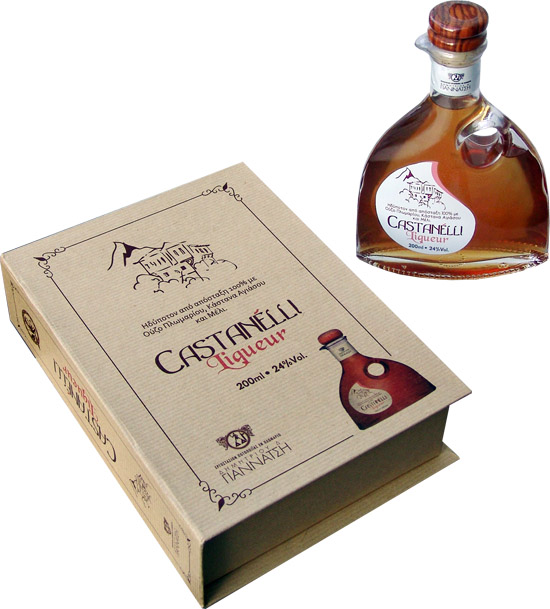 Available at: 200ml bottle in casket

Available at:: 500ml a ceramic jug 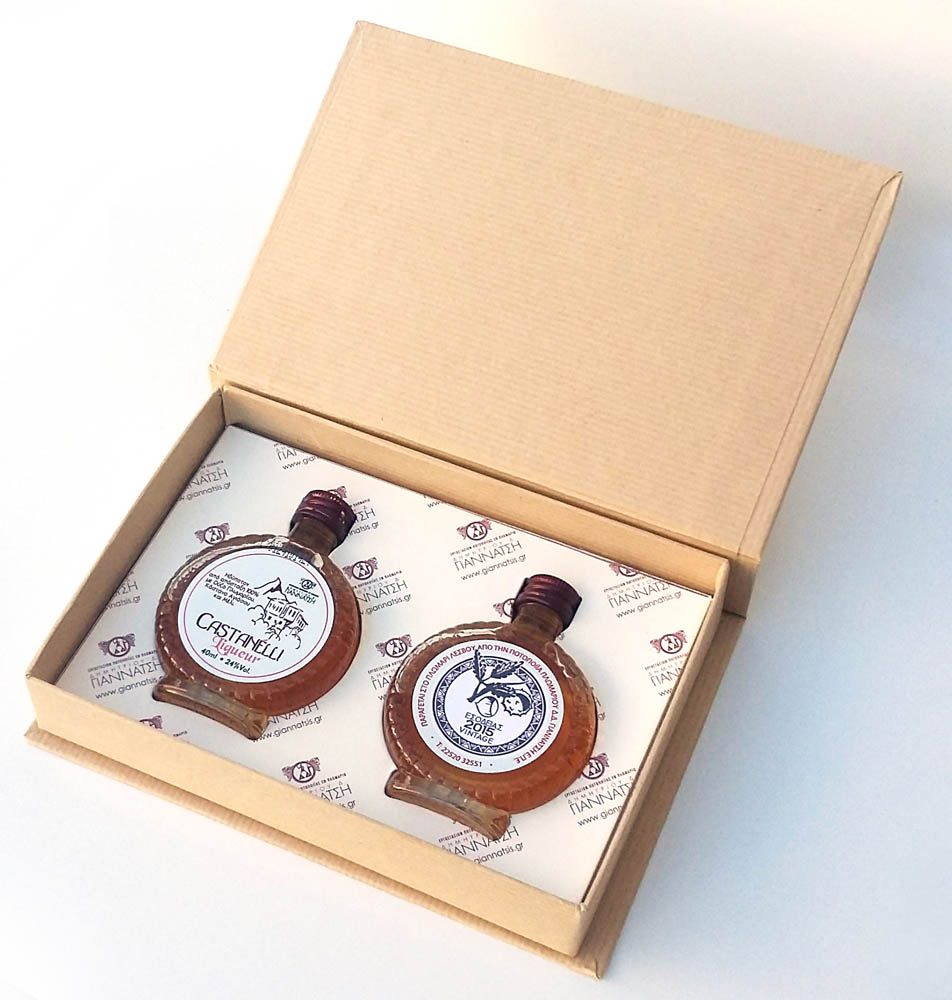 Available at:: 2x40ml in casket